Morris Dancing With Stick In The Mist - An Open Invitation

Forgive the delay in checking in with you and your students. I was eaten by the holidays!

I just wanted to say thank you for letting our group come in and perform for your students.  I hope they had as much of a good time as we did!  If any of them, including yourself, would ever like to come play for us we'd love to have you. You need not commit to every weekend! Although it you would like to dance out with us for May Day or the other May celebrations, it would be a good idea to come at least a few practices before hand so you have a feel for how the group performs.

If 11:00 AM on Sundays is difficult, both the Morning Glory Girls Garland (who start at 1:00) and Harts Brook Garland Women (who start at 2:00) also practice at Whately Elementary on Sundays and both are also in great need for a musician (their practices start on 1/13).  You could come play for all three and really have fun with the May festivities!   The girls will be learning a dance to the tune of Simple Gifts. "They will also be dancing to "Off to California."  I could get the music to any interested students. Remind them we don't require them to be professional level. And playing morris tunes means repeating the music over and over so they'd really have an opportunity to learn a few songs solid by the end of the season.

We and Borderline, another Morris team, will be performing in Northampton on New Years eve (around 5:30). If you're there, stop by and say hello!

Jazz great Dave Brubeck dead at 91:
The jazz legend died a day before his 92nd birthday. 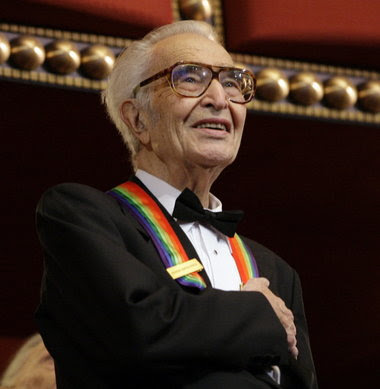 Dave Brubeck, a jazz musician who gained fame with recordings such as "Take Five" and "Blue Rondo a la Turk," died on Wednesday morning at Norwalk Hospital, in Norwalk, Conn., according to the Chicago Tribune.

Brubeck was one day short of his 92nd birthday. He died of heart failure, en route to "a regular treatment with his cardiologist,” his longtime manager-producer-conductor Russell Gloyd told the newspaper.

"Take Five" relied on the drumming of the late Joe Morello, a Springfield native who learned his skills at the Pizzitola Music Studio, which was located above the old Victory Theater in Holyoke.

Brubeck was the featured act that the reopening of the Calvin Theatre in Northampton on Oct. 7, 1998.

In a 2006 interview with The Republican, Brubeck was asked which of his many artistic achievements gave him most satisfaction, Brubeck mulled over his 170 CDs ("It's hard to pick one . . .") and talked about a new piece he has been commissioned to write for the Monterey Jazz Festival based on John Steinbeck's novel "Cannery Row."

"If I would pick one thing," he finally decided, "it would be the piece I wrote for the pope. The Diocese of San Francisco, knowing that the Pope (John Paul II) was gonna be at Candlestick Park . . . asked me for nine minutes of music for the pope to enter the stadium.

"They wanted it on the theme, 'Upon this rock I will build my church, and the jaws of hell cannot prevail against it.'

"I turned it down. I said, 'I can't do nine minutes.' I went to bed that night, and I said to myself, kind of in a half-dream, 'Bach would've written a chorale and fugue on one sentence, and that's what I'd better do!'

His last area appearances included a 2006 performance at the Academy of Music in Northampton and Tanglewood in Lenox in 2007.

Brubeck is survived by his wife, Iola; four sons and a daughter; grandsons and a great granddaughter. 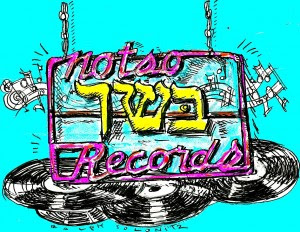 Notso Kosher Records
My desk is piled high with free CDs: Ezekiel’s Wheel, Golem, all kinds of Dutch and Polish bands, and the old standbys — Klezmer Conservatory Band and the Klezmatics.
The 12 best klez CDs of 2012 jumped out of the pile and said, “Kiss me, I’m Jewish.”
These recordings (listed below) are the nonrequired klezmer albums for the year.  These recordings are essential: 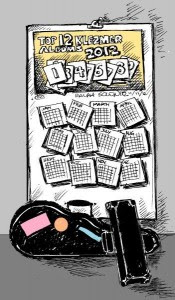 1. Orlando, 3 Days, 2 Nights. Frank London and his Klezmer Brass All-Stars lead us on a klez tour of Disney World. Talk about selling out – but a good selling out.  The cut “Mickey’s Philharmonic” features London on electric toothbrush — pulse position.  “Whistle While You Work” is all about short people –   Jewish short  people: Billy Crystal, Abe Beame and Menachem Begin, and that’s just the first 30 seconds.
2. I Believe in Cod.  Andy Statman flips out.  Sample lyrics: “May cod bless you and guide you . . . . Praise cod in the high heaven and in the deep sea . . . Teeming oceans, fire and hail, snow and mist, storm and wind, obey cod’s will.” 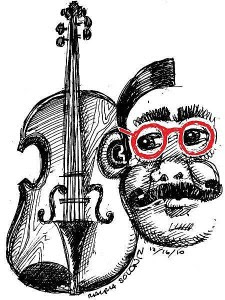 3. The Room Where I Was Born.  Violinist Steven Greenman recreates the aural architecture of his childhood bedroom in Pittsburgh.  Check out the Steelers pennants and Fiddler on the Roof LPs. Greenman does a cover version of the Klezmorim’s “Medyatsiner Waltz,” which itself was a cover. Sweaty and no A/C. 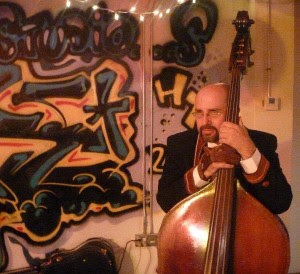 Alan Douglass, Yiddishe Cup enforcer, 2011
4. This Can’t Be Klezmer by Yiddishe Cup. This Ohio band goes outside the matzo box and constructs a toy jail, complete with corporal punishment. Perfect for the heartbroken, horny and dead.  Yiddishe Cup mixes barely adequate musicianship with a touch of humor.  On “Toot,” an earthy trombone solo morphs into a mimicry of flatulence.  It doesn’t sound like klezmer, but what did you expect from This Can’t Be Klezmer?
5.  Nonhierarchical Dynamics by tsimblist Pete Rushefsky.  Nothing on the 1 and 3; it’s all off-beats.  Drives you crazy, but in a provocative way.  There is an after-party. You have to be in New York City to get full value.  Beer by Brooklyn Brewing.  Be there.
6. The Recluse by Merlin Shepherd.  Shepherd, a British clarinetist and actor, reads Thomas Hardy poems while his wife, Polina, does consecutive Russian translation. The clarinet licks are sparse, but apropos to lyrics.  Novel.
7. Correspondence by Michael Wex.  Wexmaniacs,  you’ll love this: 60 LOL minutes of Wex badinage from his KlezKanada emceeing.  Can anybody top Wex’s Walter-Brennan-is-a-Jew riff?   No.  Almost as good: Wex’s riff about trash-talking Miami Heat Yiddish-spewers.   All but LeBron, who remains the Hebraist.
8. Odorless and Colorless.  Shtreiml.  Bandleader Jason Rosenblatt spent years in the lab on this one.  This record is rotten.  It contains sulfur.  Le jazz hot — and funky — from Montreal. 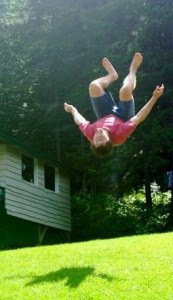 Jack Stratton, about 2008
9. Without a Net. Acrobat-and-drummer Jack Stratton uses metal parts from surgeries gone bad — mostly hip replacements — to perform Meron-klez drum licks.  Particularly good: “Blur Blind,” “Bodies Thrown Back” and “Clarity.”  The rest of the album is pretty conventional.
10. I Want to Make You Edible by Yiddish Princess.  Lead singer Sarah Gordon does freestyle rapping here about cereal (Kashi Autumn Wheat and Island Vanilla), which leads to kishke, which leads to ka-ka.  Juvenile.  And fun!
11. Red-Dirt Jewboys. Margot Leverett and the Klezmer Mountain Boys go down to Georgia on this one.  How does Margot  balance her terrific cross-cultural composing and heavy drinking?  Margot is the klezmer mixologist for the 21st century.  Her next album is, efsher, Klezmer Gamelan?
12. Blackout. Henry Sapoznik and the Original Klezmer Jazz Band give us a wake-up call: Pete Sokolow pounds stride-piano chords while Sapoznik plays electric banjo.  On the last cut, Sapoznik smashes his banjo and picks up a clarinet. Tons of squeaks.  Sapoznik whines like a fourth-grader at the end: “I quit!  I quit!”