Following the Source of Horse Tail Hair for Making Bows 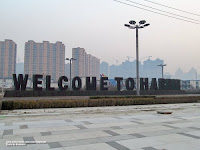 I've been sourcing horse tail hair for bows since the late 1990s.  I bought it from suppliers in Canada, Argentina and Siberia.  The Siberian suppliers sold through an agent in England named Michael T. Sowden.  In 1998, the Canadian tail hair supply started to dry up and the quality of the Argentinian hair became worse and worse.  I realized I needed to find a new source of tail hair.  In 1999, I heard from a member of the Violin Society of America that his bow hair supplier bought hair from China.  This was the first I'd heard about China being a source.  I decided to check it out for myself.  I tracked down one of the companies through my contact, through an interpreter found the auction house where he bid on lots of tails.  From them, I discovered where the tails originated from.  Some were ironically from Argentina, others were from slaughterhouses on the border between northeast China and Mongolia.  I got the name of one of the largest organizations and tracked down their address.  My first trip to China was to Harbin in August of 1999.  I'd never been to China and didn't speak the language...it was quite an adventure just getting there.  I got a ticket via Korean Air to Seoul, changed planes and flew to Shenyang, China.  From there, I took a train northeast to Harbin.  For a white guy traveling alone, it was a harrowing experience, but I found people along the way who were very helpful once they found out what I was doing.

I got to the slaughterhouse and was given a tour.  This was before digital pictures and unfortunately my camera did not survive the journey, but it's probably good.  The experience was horrific and I do not want to repeat it here.  I still have nightmares.  Suffice it to say the animals come from farms in Mongolia and Siberia.  They come across the border by train to the slaughterhouse, where they are unloaded and left in holding stalls until they can be processed.  The animals with the longest tails are separated from those with shorter tails.  After the animals are processed, the tails are separated from the bodies, but the hair is still attached to the bone of the tail.  They are rinsed with cold water and left to dry out on the courtyard of the slaughterhouse.  When dry, they are stuffed into huge burlap bags and loaded onto pallets.  Each bag is marked with a tag indicating (in Chinese) the source of the tails, the color, length and a few other things.

The bags are loaded onto freight trains.  I was able to take the same train as the tails back to Shenyang.  I found out where the tails were going (to Anping), and got the address of the auction house.  I bought a plane ticket after a night in a hotel to the closest airport and arranged to be picked up at the airport and driven there.  My source was a gentleman with a lot of music experience in China.  He started out as a young man selling pianos, but eventually got into the violin and bow business.  He spoke broken English but was very friendly and helpful.  He drove me to the bow hair supplier there and put me up in a local hotel.  I'll include pictures (below) of the experience in Anping. 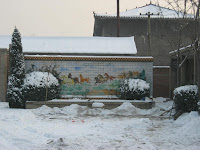 The courtyard of the workshop was interesting.  It was flagged with small round stones.  The buildings on each side had beautiful murals of wild horses.  There were two orange three-wheeled delivery trucks parked to one side.  I was led into the main building where we sat on benches around a table.  I was given a cup of hot water.  My contact and I chatted with the manager, a young man in his 30s.  He of course was interested in the quantity of tail hair I would be purchasing.  I was confident of the amount, but wanted to learn of the quality of his hair.

The Manager took me out to the courtyard, to a grey concrete basin on one said.  He explained that they wash the tails with a mild detergent here. 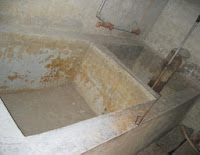 Then we went into a low building with cardboard-covered pallets on the floor.  The tails are dried here, turning them often. 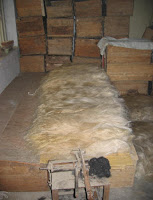 We then went into a workshop.  Inside was a flurry of activity.  On the right were two men working with bundles of black tail hair.  They were tying off the hair with white string and boxing it up for shipment.  I was told this hair was going to a brush factory in England.

On the left in back were two men working with hand-fulls of hair.  They would throw these bunches over large metal upright combs I later learned were called "hackles".  The combs would straighten the hair.  They set the straightened hair to one side in back of them.

A middle aged woman wearing an apron was strapping slats around bunches of hair, making what appeared to be a barrel.  She put the barrel between her knees. She then took a butter knife in her right hand and pulled several strands of hair out of the barrel and placed it in her left hand.  She did this swiftly and repeatedly until she had a fistful of hair.  She then tied a piece of string around it and laid it down to her side.  Once she was done, she barreled up the "drawn" hair a second time, and pulled it through.  She did this one more time with the hair.  The manager told me that this process eliminated short hairs and a lot of bad hair. 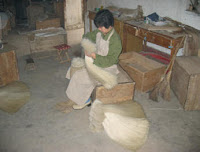 After doing this a total of 3 times, she went on to the next batch while another man took the drawn hair and brought it to another building where women were sitting at tables.  This room had a lot of light.  The women each had a bundle of hair on a white piece of butcher paper on the table in front.  They were going through the bundle strand by strand and inspecting each hair!  Amazing I thought.  Any hair that was bent, twisted, discolored, curled, tapered or not right would be set aside.  The poor quality hair would be used in furniture (mattresses, cushions. I was told they sold some to Honda and Mercedes for seat cushions).  Each bundle would be looked over by at least two of the women.  When they were deemed of good quality, they were placed in a tray and taken to a final setting where a man would make sure the ends were even and tie them up for packaging.  It was a lengthy process, but these people were very skilled. 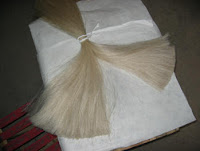 After the visit to the workshop and tour of the facility, we went back to the Manager's office, where I talked about quantities, quality and pricing.  I said I would place an order when I got back to the US.  The Manager invited my contact and I out to dinner at his house that night.  After a rest at the hotel, I was picked up by some dour looking men in the lobby and driven to the Manager's house.  He lived in a sad looking building that looked like a shack.  It had a tin roof and adobe walls.  I had to duck my head when I went in.  We were met by the Manager's young wife.  She was very pretty.  She invited us in and took our coats.  Dinner was in a side room near a kitchen.  There was a big round dais in the middle of the table, and everybody was drinking beer from little glasses.  Each course was toasted with words by one of the men.  There were no women present.  "Gumbeh!" 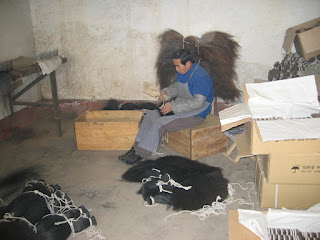 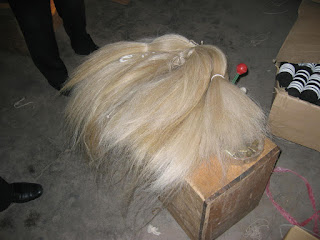 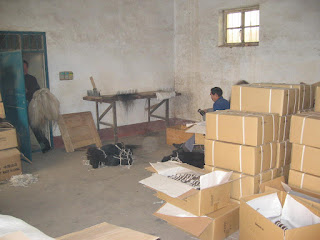 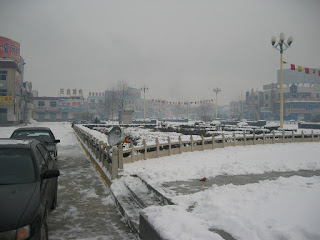 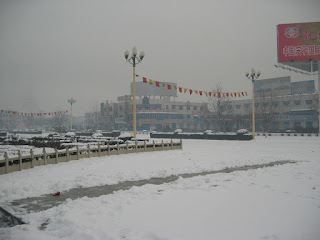 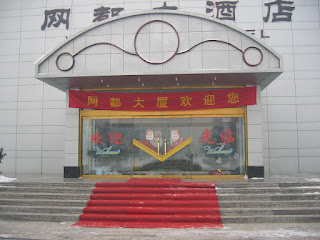 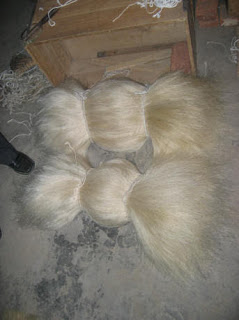 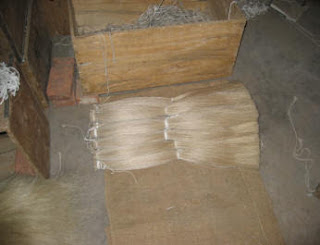 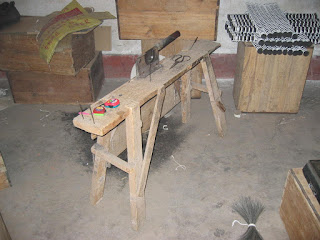 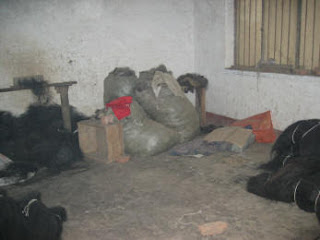 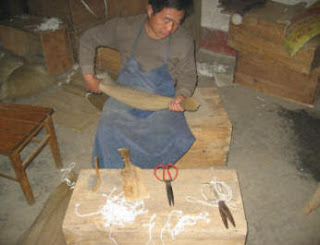