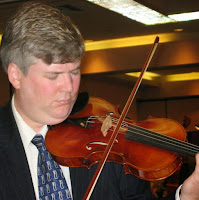 I am primarily a violinist (by trade), and a violist (by heart).  I play a Richard Cartwright 1984 viola he named "The Monster" due to it's size (18"), which renders it unplayable by most people.
Robert Merfeld gave me my first viola lesson.  I'll never forget it.  It was during my 2nd year at Apple Hill Music Camp in 1975.  I had wanted to study the Mendelssohn Octet, but the violin slots were already taken.  I went to Robbie to see if he would be willing to make an exception.  He said he couldn't, but that he was short one viola player.  I said I would take it, but didn't have an instrument and didn't know how to read the clef.  Robbie explained that the reading the clef was just like reading the treble clef in 3rd position, but played in first position.  He showed me a couple things and I immediately got it.  I was able to join the session and thus study and perform the Octet.  Since then, I've studied viola with Betty Hauck and Dick Loomis.
At Hampshire College, I performed the Brandenburg Concerto No. 6 at Hampshire

College with friends in a private concert.  We borrowed a harpsichord from Amherst College for the event.  Anne Kerns was our mentor.
After college, I joined the Pioneer Valley Symphony Orchestra, first on violin, and then switched to viola when they asked for volunteers.  Richard Cartwright was performing with the orchestra at the time, and he loaned me the Monster for a few months before I bought it from him.
In '96 my former chamber music coach, Eric Stumacher, suggested I take a teaching position at the Keene Institute for Music and Related Arts on violin and viola.  I had several students at the time, and performed with the Keene Chamber Orchestra in the viola section with Dick Loomis and Kathy Stumacher among others.  I also joined the pit orchestra of the Valley Light Opera on viola.

In college, I played in several old-time and bluegrass bands including Pieces of Neck, The Lonesome Fish Quintet, Backwoods Medicine and Pig and the Idiot.  After college, I joined Maple Ridge Bluegrass in '89 with Joe Blumenthal, Terry Atkinson and John Rough, and Swift River Bluegrass in '97 with Claiborne Woodall and John Rough.  That year, I also co-founded Woodkerne Celtic Band with Dan Richardson and John Rough.
I'm a co-founder of Celticado with Jim Bunting and Claudine Langille, an acoustic wedding trio, and founder of The Americana Project, a bluegrass group.  Brian Bender and I formed Fiddle Hill in 1995 and have been playing for dances, weddings and special events since.

Some recordings from various groups
I am a co-founder of Mandolin New England (with Will Melton and Josh Bell).  Mandolin New England (MNE) is a musical organization fostering positive mandolin experiences for all ages and backgrounds.  The group consists of a mixture of various mandolin ensembles and groups and is hosted by Sweet Music in Granby and Josh Bell in Providence, students and colleagues from New York, western Mass, Connecticut and Rhode Island.
I've always been fascinated by teaching.  Since I was very little, my mother and father encouraged me to look things up on my own, and share what I learned.  In sixth grade, I had a group of friends that shared what our teachers taught us.  Jenny was learning bassoon, Lisa was learning flute, Rob was learning viola, Kristen, Alex and I were learning violin.  We would often get together and talk about what we learned that week, or about concerts that were coming up.  We kept up this tradition all through High School.  In College, I joined the Five College Symphony Orchestra on violin, and later switched to the viola section.  My first informal student was a violinist that wanted to learn the viola.  I played fiddle in a bluegrass band called Pieces of Neck my first year.  Our mandolin player was more of a jazz player and refused to chop.  In bluegrass, you need the chop sound, which works kind of like a snare drum.  I bought my first mandolin after months of frustration, and taught myself to play it.  After College, I formally opened my studio and began to accept students on the mandolin, violin and viola.  My first studio was at the Fretted Instrument Workshop in Amherst.  A few years later, I taught at Downtown Sounds in Northampton, and then was one of the founding teachers at the new Northampton Community Music Center on
South Street.  In '95, I was hired by the Keene Institute for Music and Related Arts, where I also received a certification in music education.  I taught viola and guitar there.  KIMRA as it was called, merged with the Keene Community Music Center.  I taught there until my son was born in 2009.  I now teach out of my home in Granby, MA.
Bio, written by a former student:
"Mr. Sweet attended the New England Conservatory of Music's pilot Suzuki program from 1966 until 1972, and the Conservatory at Rivers from 1972 until 1980.
Sweet attended the Apple Hill Center for Chamber Music from 1974 until 1980 where he studied chamber music coaching, and focused on the music of Mozart, Bach, Dvorak, Brahms, Schubert, Borodin and Mendelssohn.  Sweet studied violin with Judith Canon, Mary Parker and Phillip Naegele; viola with Betty Hauck and Robert Merfeld.  He attended mandolin master classes with David Grisman, Sam Bush, Adam Steffey, Mike Marshall; and fiddle master classes with Darol Anger, Stephane Grappelli and Vasser Clemens.  In 1996, Sweet spent three weeks in Kilfenora, Ireland, where he played nightly at Linane's Pub and attended Set Dances with the Kilfenora Ceilidh Band.  He attended a concert and master class by De Dannan with master fiddler Frankie Gavin.  Sweet went to Hampshire College in Amherst, Massachusetts, where he majored in Music.  He studied jazz with Roland Wiggins at UMass, electronic music with Randall McClellan and World Music with David Reck.  His thesis was on music as part of a therapeutic environment.
Mr Sweet graduated with a BA in 1985 and opened his studio in 1986.  Since then, Mr. Sweet has been teaching adults and teenagers how to play the violin, mandolin, guitar and bass.  Mr Sweet performs and therefore teaches celtic music, bluegrass, klezmer and world music.  With a background in chamber music coaching, Sweet coaches a classical mandolin ensemble that performs with Mandolin New England in western Mass and Providence, RI."
Email ThisBlogThis!Share to TwitterShare to FacebookShare to Pinterest